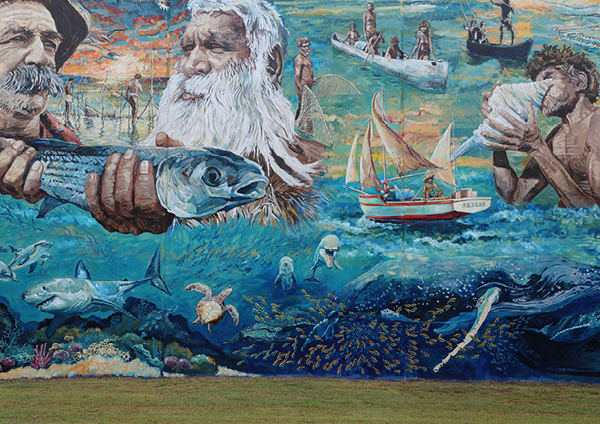 A mural depicting the history of fishing on the Fraser Coast has been painted on the side wall of the Urangan Fisheries cold store which faces Fishermans Park.

The mural was commissioned by the Fraser Coast Regional Council and developed in consultation with the Butchulla Native Title Aboriginal Corporation and mural artist Akos Juhasz*.

“It links the Butchulla and European history of fishing in the region,” Councillor Zane O’Keefe said.

“The Butchulla People have been fishing these waters for thousands of years. They taught the early European settlers how to fish here and worked on many of the local fishing boats.”

“This was where we played as children, although the sea came to where the road is on a king tide then before they built the harbour,” she said.

“Archaeological investigations of the dunes on neighbouring properties show that they are 3,800 years old and contain middens which are up to 900 years old and were still in use up until the last 100 years.

“The Butchulla People have a long association with the area.

“The Butchulla also have a long association in the local fishing industry.”

In about 1903, as a 19-year-old, Percy was one of the first Butchulla to hold a professional fishermen’s licence.

When her brother Ian Wheeler left school, he went to work with local fisho Kev Riley; the Rileys are their cousins; and her other brother Ken, spent all the time he could on K’gari fishing.

Her father worked with Nick and Ed Schultz, the founders of Urangan Fisheries.

The mural is culturally and historically accurate, artist Juhasz said.

“Aunty Lorraine told me a lot of stories about the local history of fishing and the families,” he said.

“She gave me pictures and I did a lot of research so that the nets, the boats and fishing methods I have painted are accurate.

“While they reflect the people and history of fishing, they are not of anyone in particular. The faces I created.”

The mural also includes a range of marine animals that live in the waters of Hervey Bay that were culturally significant to the Butchulla People such as dugong, diamond-scaled mullet, turtles and dugong.

Mrs Woolley hopes the mural will form a part of a cultural trail that starts at the Kundu Tree (scar tree) in Dayman Park and winds its way along the shoreline through Fishermans Park to Pulgul Creek – culturally significant spots for the Butchulla.

“Fishermans Park has many historic links to the Butchulla and fishermen. It was a Butchulla meeting place and the region’s professional fishermen used to tan their nets there,” she said.

“It was for many years the home of the Hervey Bay Seafood Festival which was organised by local professional fishers.

“If it all goes to plan eventually there will be another shelter shed, barbecue and all abilities access to Fishermans Park.”

*Works by Hungarian-born and now Fraser Coast based Akos Juhasz, adorn 15 buildings and public spaces across the region including the Maryborough City Hall, the Howard State School, Station Square Shopping Centre and the Signature Building in Torquay Road.