Summary
The Reserve was named Pir’ri, which means mangrove, by members of the Wondunna Clan of the Butchulla people.
Address
Main entrance to walking track loop off Mathiesen Rd
Booral QLD 4655
Image 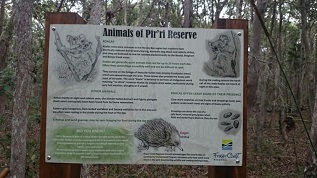 The Butchulla people are the traditional owners of the area. The Booral foreshore is one of the richest archaeological and culturally important sites in the Fraser Coast.

The lots here were created in 1888. Over time the land was partly cleared for grazing and growing pineapples.  After the 1980s, the cleared areas were allowed to grow back naturally.

In 2007 and 2010 this land was purchased by council under the Environmental Levy Program.  This ensured that the area’s significant environmental features would be preserved for the enjoyment of residents and visitors.

The Southern section was named “Woodland Park” by a previous owner who encouraged members of the community to visit and observe and record the wildlife.

In 2015 the Reserve was officially named “Pir’ri Reserve” by the local traditional owners.

The Reserve was named Pir’ri, which means mangrove, by members of the Wondunna Clan of the Butchulla people.