The bridge was funded and built on a public road by Mr and Mrs L S Smith of nearby Mt Joseph Station who wished to make their own commemorative gesture during WWI.

It is a substantial wooden bridge over a small creek with a pair of sandstone piers at each end.

Leaded marble plates are fixed to the piers.

A small commemorative stone cairn with metal plaque was later erected at the entry to the bridge by the Smith's son. 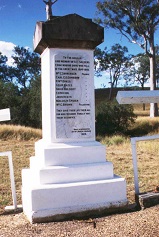