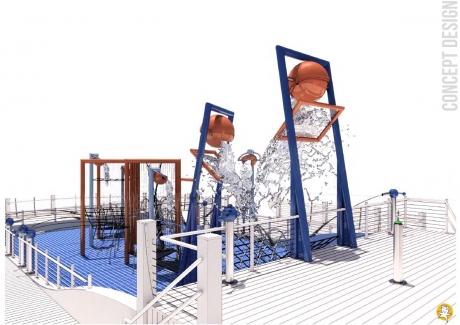 Work has started to install an Aqua Adventure Playground at WetSide in Hervey Bay.

Playscape Creations was awarded the $1.3 million contract by the Fraser Coast Regional Council to install the playground which is anticipated to be operating by the middle of the year, weather permitting.

Federal Member for Hinkler Keith Pitt said the new playground was a welcome addition to the popular Hervey Bay venue.

“This project has been funded through the Federal Government’s Local Roads and Community Infrastructure (LRCI) Program. It will add a new dimension to recreation in the Bay which helps enhance the city’s liveability while boosting local jobs and supporting local businesses,” Mr Pitt said.

“Fraser Coast Regional Council has received $9.7 million from the first three phases of this program which ensures projects get underway as soon as possible to provide an economic benefit to the community,” he said.

The adventure playground has replaced the WaveRider which had reached the end of its serviceable life and needed to be replaced, Councillor Jade Wellings said.

“It will add a new dimension to WetSide as it can be used by families, school groups, people with disabilities and groups of friends.”

The course is made up of nine linked challenges which test strength, agility, co-ordination, and stamina.

Water jets, cannons and dumpers are activated as participants move through the course.

To boost the stakes, participants are timed, and spectators can also activate water jets, sprays and canons to hose down participants.

The challenge and interaction between participants and spectators will provide a great spectacle, and entertain on‑lookers, and encourage more participation as everyone will want to get involved, Cr Wellings said.

“The adventure playground will enhance the popularity of WetSide and expand the age range of people using the facility,” Cr Wellings said.