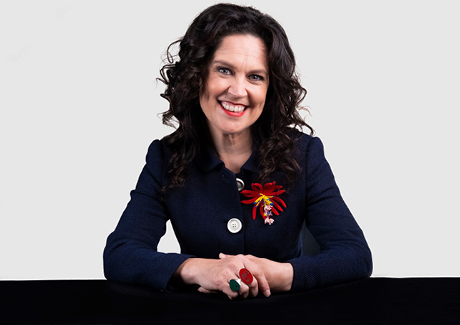 Author, journalist and TV presenter Annabel Crabb is the keynote speaker at Fraser Coast Libraries’ Lines in the Sand festival of inspiration for readers and writers next month.

Fraser Coast Mayor George Seymour said Ms Crabb was a journalist and presenter who had covered Australian politics for 20 years so should offer some fascinating insights and anecdotes.

“Annabel has had a very interesting career and her latest book is Well Hello: Meanderings from the world of Chat 10 Looks 3, co-written with her friend and colleague Leigh Sales,” Cr Seymour said.

“She and Leigh teamed up to create their hit podcast, Chat 10 Looks 3, in 2014 and Well Hello, which was published in September 2021, is their first book together.

“Annabel will deliver the keynote address at the festival on Saturday 17 September at 9.30am at the University of Sunshine Coast’s Fraser Coast campus auditorium.”

Cr Seymour said best-selling author Rosalie Ham would also be speaking on Saturday 17 September at 1pm and conducting an all-day workshop, titled “Crafting Your Words” on Sunday 18 September as part of the festival.

“Rosalie has written several novels including The Dressmaker, which was made into a popular film starring Kate Winslet and Liam Hemsworth,” he said.

“We’ll also be hearing from author and journalist Chris Hammer on Friday 7 October.

“Chris wrote the Martin Scarsden series of novels which have been bestsellers in several countries.

“He has also had a 30-year career as a journalist and has worked for The Bulletin, Fairfax and on the SBS program, Dateline.”

Cr Seymour said tickets were free and numbers were limited, so people would need to book quickly to secure a place in the audience once tickets were released.

“It’s going to be a great festival for readers, writers and everyone interested in fascinating stories. The libraries have copies of the authors’ books which people can borrow for free, so I’d encourage those who aren’t already familiar with the speakers’ work to check them out,” he said.

Lines in the Sand is an annual literary event to inspire readers and writers from all over the region.

It features a writing workshop and author talks to get the creative juices flowing; and to ask questions of published authors.

Annabel Crabb: is a journalist, television presenter and author who has covered Australian politics for 20 years as a news reporter and columnist. She will take to the stage at USC for an hour of wit, humour, insight, and thought-provoking discussion including a fireside chat with Mayor George Seymour.

Rosalie Ham: Join us for a wonderful author talk with best-selling author Rosalie Ham. Rosalie will be discussing her novels including her most famous, “The Dressmaker” and her personal favourite, “There Should be More Dancing”. The author will include a Q&A session at the end of her talk. Also join Rosalie for an all-day, hands-on “Crafting your Words” workshop to learn about the skills of writing.

Chris Hammer: is a leading crime fiction novelist and author of international bestsellers Scrublands, Silver and Trust. He has a new novel about to be published titled, The Tilt, and he will be interviewed by Fraser Coast TV personality, Melissa Davis.,