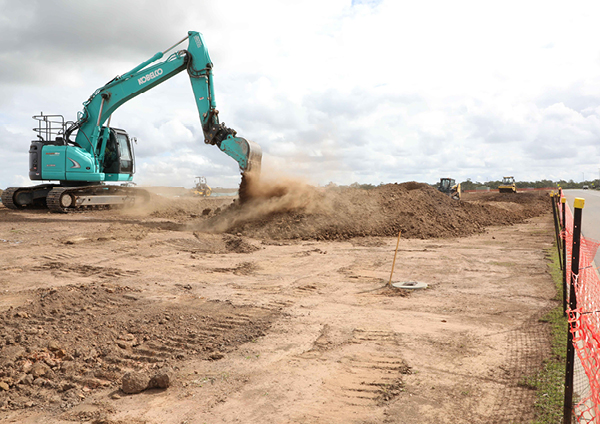 Building … Earthworks have started to build a new car park at the Fraser Coast Sport and Recreation Precinct.

The number of carparks at the Fraser Coast Sports and Recreation Precinct will more than double.

Cr Darren Everard said the sports precinct was providing locals with access to high-quality sporting fields and helping to attract events which bring more visitors to the region.

“It’s now three years since the sports precinct opened and it’s been heartening to see how the new facilities have been embraced,” he said.

“Work has now started on another 170 carparks on top of the existing 146 carparks.

“The new carparks are part of the works included in the master plan and will cater for the growing number of sporting groups now using facilities at the precinct.

Cr Everard said the precinct had hosted exhibition matches between visiting state teams and local sides, as well as state carnivals such as the Queensland schools’ rugby union under 15 boys’ championships in July.

“The extra carparks will come in handy when the Queensland Touch Football Junior State Cup is underway or when exhibition matches, like the game between Queensland’s premier football team, the Brisbane Roar and a Wide Bay All Stars team,” he said.

“About 3,500 spectators turned out to watch the recent Brisbane Roar game, which is up on the year before.

“Developing the precinct is a long-term project that will build facilities for the growing Fraser Coast.”

Local company Grand Civil has been awarded the $1.5 million contract to do the carpark works.

“The work is fully funded by a grant under Phase Two of the Australian Government Local Roads and Community Infrastructure Program,” Cr Everard said.

Federal Member for Hinkler Keith Pitt said encouraging more people to get involved in sport was a positive for the whole community.

“Whether that’s through expanded sporting facilities or more parking spots, it means more families and individuals in Hervey Bay can get out and be active,” Mr Pitt said.

“Fraser Coast Regional Council has received $9.7 million from the first three phases of the Local Roads and Community Infrastructure Program and an additional $1,912,057 was announced in March.

“The aim of the LRCI program is to improve the amenities available to local residents and the wider community and I look forward to seeing what other projects are planned for this additional funding.”

The LRCI program supports local councils to deliver priority local road and community infrastructure projects across Australia, supporting jobs and the resilience of local economies to help communities bounce back from the COVID-19 pandemic.

It is anticipated that the work will take four months to complete, barring interruptions from wet weather or materials shortages caused by the building boom sweeping the country.

While the project site will be fenced off, it should not impact on other activities at the precinct.