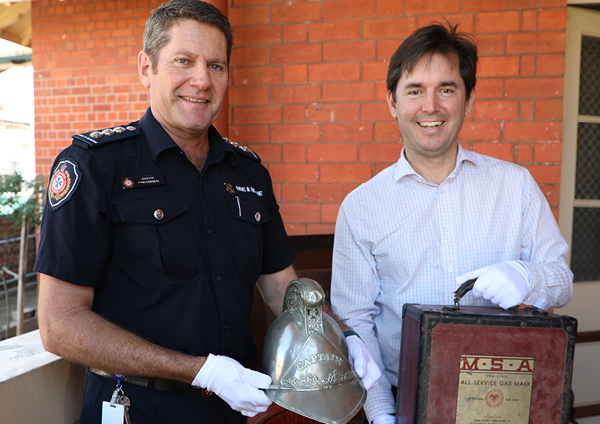 Going home … Fraser Coast Mayor George Seymour and Queensland Fire and Emergency Services Manager Business Operations North Coast Region Inspector Cameron Corneal check out some of the items Council had in storage that will be on display in the new Maryborough Fire Station.

A collection of Maryborough fire-fighting equipment is heading home

The collection contains more than 120 items ranging from catalogues and photographs to small equipment such as gas masks, fire alarms and fire extinguishers, as well as larger items such as a two-wheeled timber fire ladder.

Some of the smaller items were stored at the Bond Store Museum in Wharf Street, Maryborough until the 2022 floods when they were moved next door to the Customs Residence.

Some of the larger items have been on short-term loan to the Hervey Bay Historical Village and Museum since 2017.

“Items given to Council by the Maryborough Fire Brigade Board in 1990 will be given back to Queensland Fire and Emergency Services to be displayed in the new Maryborough Fire Station,” Fraser Coast Mayor George Seymour said.

“The items were donated to Council by the board when it was disbanded, and the service became part of the wider Queensland Fire Service which is now the Queensland Fire and Emergency Services.

“We’re grateful to the Hervey Bay Museum and Historical Village, who worked with Council to care for and display some of the larger items so they could be enjoyed by members of our community and visitors to our region.

“Many significant items have been donated to Council for safekeeping over the years, and it’s fantastic when members of the community create these fantastic new institutions and take an active role in sharing their own stories.

“We, as a council, feel so lucky to have played a role in the safe custodianship of these items and are thrilled to be returning them to their original owners.”

The Maryborough fire brigade was the first in Queensland to be formed outside of Brisbane.

“The destruction of 12 CBD premises in 1876 provided the motivation for the development of a fire brigade,” Cr Seymour said.

In July 1882, the Maryborough Municipal Council allocated funds to buy fire-fighting equipment and provided land near the intersection of Lennox and Kent streets for its storage.

The volunteer firemen were paid two shillings an hour when attending a fire and one shilling and six pence for attending fortnightly drills.

In 1888 the first Maryborough fire station was built in Adelaide Street. It included a high tower from which a fire watch was kept.

When the watchman saw a fire, he would ring a bell. The number of times the bell rang identified in which part of the town the fire was burning.

The bell was phased out after 1922 as telephones become more common.

The building was dismantled in 1942 and the present station at the corner of Alice and Lennox Streets was opened in 1951.

The current station is undergoing a multi-million revamp and will be opened in November.

The equipment that will be on display includes a two-wheeled ladder trolley on a frame which was pulled to the fire themselves by the firemen.

The trolley contained a hand pump, a water barrel and a large hose and reel.

By 1885 the Maryborough Fire Brigade Board had purchased the best fire-fighting equipment available including a horse-drawn vehicle which carried men, hoses, axes and other equipment and a horse-drawn steam-powered pump that had been built in England.

The machine was named "Progress" because it was the most modern machine of its type in Australia at that time.