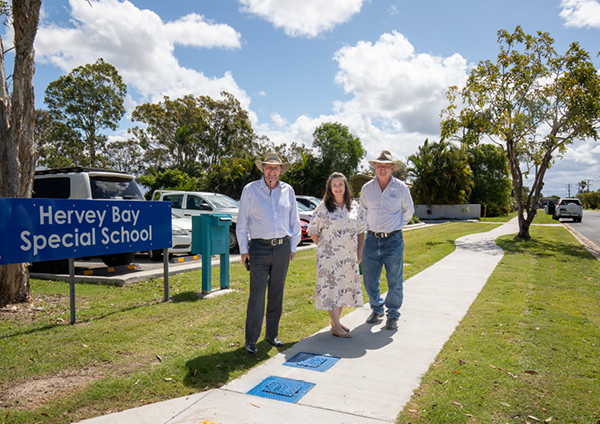 Getting to school will be a little easier for students attending the Hervey Bay Special School or the Kawungan State School thanks to a footpath installed by the Fraser Coast Regional Council.

The work was one of several footpath projects across the Fraser Coast that have been completed, are underway or about to start.

“As part of the project, about 430 metres of a 1.3m-wide concrete footpath has been installed on the southern side of Frangipanni Avenue and on the western side of Eugenia Way between Grevillea Street and Oleander Avenue,” Cr David Lee said.

The project also included the installation of a refuge island crossing point in Frangipanni Avenue.

“The work will help ensure students are safe on their way to and from school and reassure parents that it is safe to let their children walk, cycle or scoot to school.

“Reducing the number of vehicles on the roads, especially around schools, is very important to Council and also helps us reduce congestion.”

The $205,000 project was partially funded under the State Government’s Transport Infrastructure Development Scheme and undertaken by Council’s workforce.

Projects in Maryborough and Burrum Heads will cover the replacement of worn-out footpaths and new footpath projects.

“In the current financial year, Council has allocated $1.6m to building new footpaths and bikeways and $593,000 to replacing worn-out footpaths,” he said.

In Burrum Heads, a 100m section of the existing paved footpath along the Esplanade adjacent to the Burrum Heads Boat Ramp carpark towards Ross Street will be replaced with a 1.3m-wide concrete footpath.

“It is anticipated that the works will be completed by the end of November, weather permitting.”

The $90,000 project will be undertaken by Council’s workforce.

In Maryborough, the 110m section of footpath on the western side of Saltwater Creek Road between Ellis Street and Nuneaton Street is also being replaced.

The section was identiﬁed for replacement as part of Council’s annual footpath inspection program.

The $120,000 project is being undertaken by Council’s workforce.

Other footpath projects near schools to be delivered by Council in the next three months include:

The $260,000 Kent Street footpath replacement project will be funded from a grant through the State Government’s Works for Queensland Round 4 funding Program.

Council hopes that much of the work can be undertaken during December and January when the schools are closed for the Christmas holidays.